About Services Experience Stats Benefits Past Projects Contact Us

BRADY’s Reservoir Restoration business line has a singular focus: the most effective code compliant and safe restoration of municipal water storage reservoirs. BRADY is internationally recognized as a leader in the field of water storage facilities. Our team includes two of the industry’s foremost experts in reservoirs: Richard Brady, P.E., BCEE who has managed more than 50 reservoir design projects of all types, shapes and sizes, and Max Dykmans, S.E. who has completed more than 3,000 prestressed concrete reservoir projects around the world over the past 40 years. Lastly, our approach saves up to 35% on project costs and produces 33.5% faster project completion times when using our r360™ progressive design-build process, our unique system where we are the design-build entity, general contractor, and client’s single contract holder.

Design and design-build of reservoirs, storage tanks and associated appurtenances

“We are considered among the most experienced, focused, and capable experts in the world.” He has 36 years of experience in water resources planning and in the design, management, and construction administration of drinking water supply projects. He is also an internationally-recognized water engineer and a contributing author to the AWWA’s “Water Treatment Plant Design”. He has served as the Project Manager for water treatment plant projects plant sizes ranging in size from 5 mgd up to 2,000 mgd. His resume for surface water treatment plant projects exceeds 6 billion gallons per day. Max Dykmans is a civil/structural engineer with over 45 years of relevant experience in the design and construction of water and wastewater reservoirs and supporting infrastructure.


Mr. Dykmans has designed and/or constructed over 2 billion gallons (500 MG in Southern California) of reservoir capacity. Prior to joining BRADY in 2011, he was the Founder and President of DYK Incorporated (now DN Tanks, Inc.), responsible for planning, development, and coordination of multiple multi-million dollar projects from design phase through construction of prestressed concrete water and wastewater storage reservoirs. As an active Committee member of AWWA, Mr. Dykmans was instrumental in developing the AWWA D110 standard, which includes a robust evaluation of the ability of reservoirs to withstand earthquakes.

ONE TEAM. ONE FOCUS.

Our core BRADY Reservoir Restoration team has 100+ years of water project engineering experience tackling some of most significant reservoir projects. From the 35 million gallon Earl Thomas reservoir in San Diego, CA – the world’s largest prestressed concrete reservoir at the time in 2005 – to working on over 1+ billion gallons of storage capacity, we are considered among the most experienced, focused, and capable experts in the world.

Estimated amount of deferred maintenance of CA water storage reservoirs up to 35 MG needed to become code compliant and safe.

Estimated percentage of CA municipalities that have water storage reservoirs up to 35MG that require restoration to be code compliant and safe. 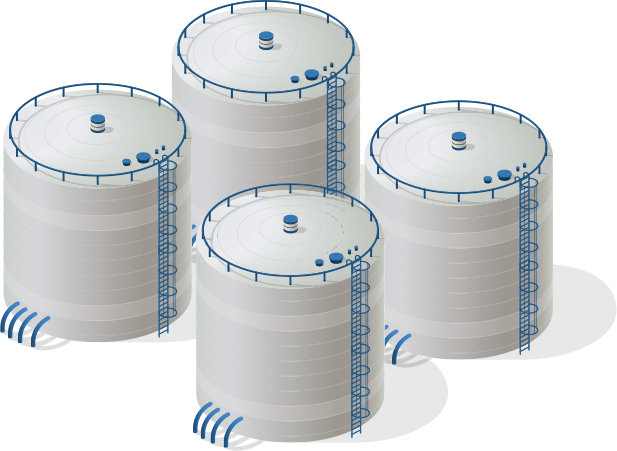 Estimated damage caused by the Oroville reservoir spillway failure.
According to the Department of Water Resources

Estimated dollar value of savings in CA waiting to be unlocked by reservoir restoration vs. replacement.

Use entire lifecycle of infrastructure vs. early
and unnecessary replacement

Solution
BRADY staff conducted both internal and external inspections and prepared a structural and operational reliability analysis to determine the feasibility of rehabilitation, repair or replacement of the aging reservoir. BRADY was then retained to design the replacement of the Earl Thomas Reservoir, which included the redesign of Alvarado’s main treatment plant entrance, originally constructed in 1950, to improve security and appearance. BRADY also provided resident engineering services for the project and was responsible for day-to-day construction administration of civil site work, including the appurtenant piping, pumping, and flow control equipment required for operation of the new reservoir. The work also included a 60-inch diameter tunnel that hydraulically connected the Earl Thomas Reservoir to the twin 21.5 MG reservoirs completed in 1998.

Outcomes
The Earl Thomas Reservoir project was an award winning project for the City of San Diego Water Department. All design work for this project was performed in accordance with the strictest project-specific quality control procedures, and in cooperation with client quality assurance requirements. The design was accomplished within budgetary and schedule parameters. Our stringent cost control procedures resulted in minimized construction change orders. At project completion, Richard Brady, P.E., BCEE was recognized by City of San Diego Mayor Jerry Sanders as the “100 Million Gallon Man”, due to Mr. Brady’s personal responsibility for planning, designing, and managing the construction of more than 100 million gallons of new and rehabilitated reservoir storage for the City of San Diego.

Problem
The City of San Diego was constrained by a site for a treatment plant designed in 1946, and had to expand due to a growing city and the more stringent drinking water quality regulations mandated by the Safe Drinking Water Act of 1986. The Alvarado Water Treatment Plant was required to ensure the adequate supply of clean drinking water to its 1.2 million residents via a water plant originally sized at 66 million gallons per day (mgd), that now required 200 mgd and new state-of-the-art clearwell reservoir storage, given the entire City of San Diego’s water supply to 500,000 residents was at risk in the event of a serious seismic event that would result in the collapse of the plant’s aging clearwells. The existing 20 MG rectangular reservoir, state of the art for its time in 1946, had already suffered the collapse of a roof panel that resulted in operational chaos. BRADY was tasked with designing new clearwell storage to meet the demands of a much larger city. In the end, BRADY successfully designed two new 21.5 MG reservoirs to fit in the existing 20 MG footprint – more than doubling the size without the additional need for a single yard of new real estate.

Solution
The design of two, 21.5 MG each, circular, prestressed concrete reservoirs, which serve as clearwells to the treatment plant and satisfy the daily water demands for a planned 2060 population of 1 million citizens. At the time of construction, the 21.5 MG size was the largest prestressed concrete reservoir in the state of California. And we built two, in the original 20 MG footprint.

Delivery Method
Richard Brady, CEO of BRADY, was the Engineer of Record and served as Project Manager during the extensive design-bid-build process.

Outcomes
Public Awareness: The reservoirs are partially buried and a portion of the roof on one reservoir is dedicated to a Native Plant Demonstration Garden. The reservoirs were primarily designed to provide the City with storage facilities to meet their present and future needs; concurrently, this design enhanced the public’s awareness and understanding of local water issues.

Nationwide Project Award. The Alvarado Regulating Reservoirs project was awarded the American Society of Civil Engineers Outstanding Civil Engineering Project Award in 1998 in the water facilities category, and the American Public Works Associations 1999 National Project of the Year Award. The project also earned the recognition of the Associated General Contractors for Excellence in Underground Utility Construction. In addition, on May 4, 1999, by resolution of the City Council, City of San Diego, the Alvarado Reservoirs and Garden project was officially recognized as an important component of the City’s water distribution system.

Solution
At BRADY’s strong recommendation due to the possibility of failure in the event of a seismic event, the tank was immediately drained and removed from service to prevent a potential catastrophic safety hazard. The reservoir was constructed in 1961 in a remote area of Vista’s service area. In 2017, the reservoir is now surrounded by residential communities, extending right up to the site perimeter fencing. Concurrently, VID awarded BRADY a sole sourced contract whereby BRADY, using its r360® Design/Build Method (acting as general contractor and designer of record) developed a fast track restoration plan.

Cost
$3,490,000 (50% savings anticipated compared to new tank, not including the costly and environmentally challenging demolition of the existing 5 MG concrete reservoir) 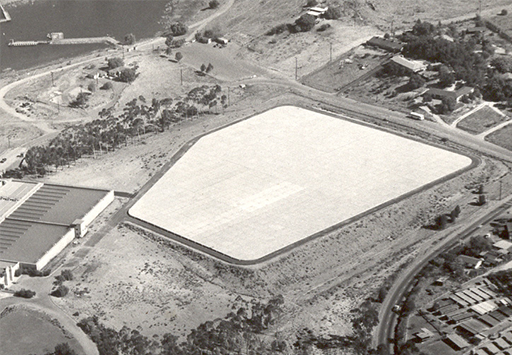 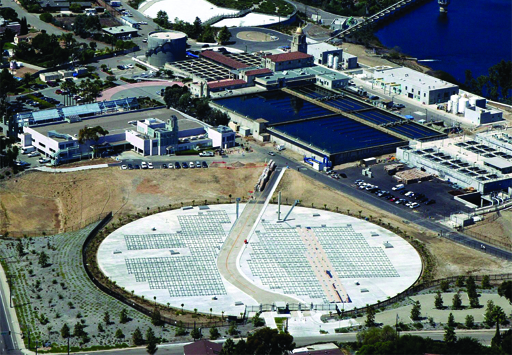 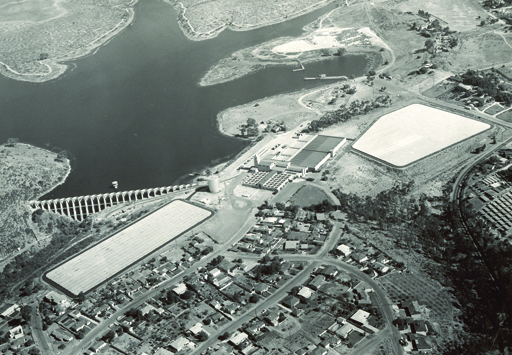 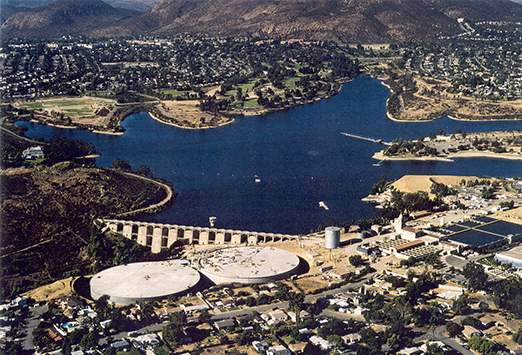 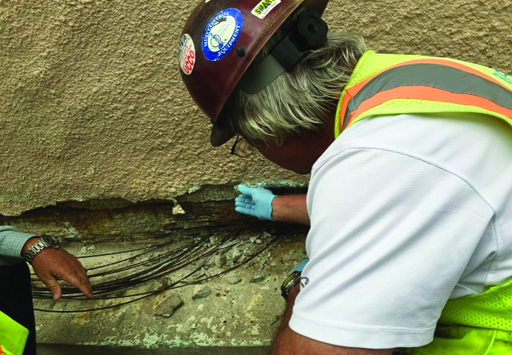 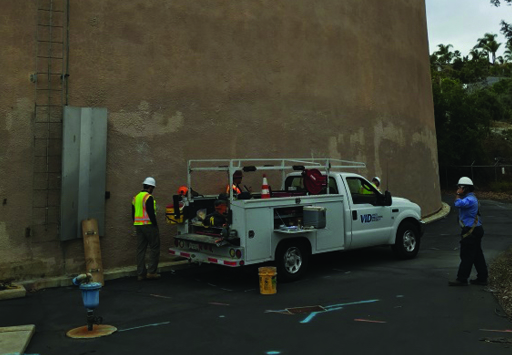 Schedule a meeting or download a brochure to
learn more about our program.